Life Without Lawyers: Liberating Americans from Too Much Law
A new book (2009) from Norton by Philip K. Howard

Philip Howard is the founder of an organization "Common Good," a non-profit, non-partisan legal reform coalition dedicated to restoring common sense to America. By conducting polls, hosting forums, and engaging with leaders in health care, education, law, business, and public policy from across the country, Common Good is developing practical solutions to restore reliability to our legal system and minimize the impact of legal fear in American life.

Mr. Howard is also author of “The Death of Common Sense: How Law is Suffocating America (Random House, 1995) and “The Collapse of the Common Good: How America’s Lawsuit Culture Undermines Our Freedom (Ballantine, 2002). “Life without Lawyers: Liberating Americans from Too Much Law” is his third venture in similar waters.

Mr. Howard’s methodology is pretty straightforward. Find a couple of instances of a frightening disparity between what was needed to be done with what was done and how long it took, then attribute blame. Blame is placed center stage at the door of the legal profession.

I am unlikely to argue with the blame even if the methodology used in arriving at it is suspect. It is disturbing in the few instances when someone bothers to investigate some of the outrageous miscarriages of justice outlined by Mr. Howard that often Mr. Howard can be seen to be exaggerating or has not quite conveyed accurately the end result of the very case he wants us to wring our hands about. In a recent review of “Life Without Lawyers,” former New York Times journalist Anthony Lewis, who has also published a book on the First Amendment, describes the disparity between Mr. Howard’s fact and his fiction. For example, in Hartford, Connecticut in 2002, a boy with autism in the seventh grade began attacking other students and kicking his teachers. His parents rejected that he be moved to a different school. The school instituted legal proceedings required by federal law. “After almost two years of legal hearings,” Howard writes, “the hearing officer issued an order that the boy be removed from the school.” Makes good reading, but the fact of the matter, as the Hartford Courant reported, the hearings lasted two months, not two years, and the boy was apparently adjusting well in his new school.

If you like reading hyperbole and exaggerated accounts, this is the book for you. It even includes the infamous $54 million trouser case where in Washington D.C. a lawyer with a robe, Judge Roy Pearson, sued his dry cleaner for that amount for allegedly losing a pair of pants. I’m not sure it is the case, but Mr. Howard tells us that it dragged on for two years, cost the Korean immigrants who owned the store $100,000 in legal fees, and led them to close the store.” Unfortunately, as I can believe the middle premise – the legal cost to the dry cleaner – probably the first premise and conclusion are correct as well.

Indeed, it is precisely the high cost of legal fees in the particular area of Chapter 11 bankruptcy that has won my concern, and has invigorated me to become involved as Economic Specialist for the Legal Victim Assistance Project (LVAP), a Congressional District Programs, Inc. 501(c)(3) registered public charity. Preliminary research for LVAP is demonstrating that three-quarters of the capital assets in a Chapter 11 bankruptcy proceeding are being disbursed as legal fees instead of an allocation of workable assets between debtor and lenders.[2] This means the efficiency of productive assets is being severely compromised in bankruptcy proceedings owing to legal fees. This means the National Product, the Domestic Product, and Disposable Income in our country is reduced to twenty-five cents on the dollar for no better reason than to fatten the wallets of law firm partners. Without any “skin “ in the game, unlike the Creditors who are owed money, or unlike the Debtor who no doubt has operated the business for years, attorneys dive fresh into bankruptcy much like vultures taking the majority of the proceeds for themselves without regard to the fairness or efficiencies intended by the very system they are there to implement. LVAP calls this a “fraud on the Court,” and, as well, it is in violation of the fiduciary trust on the part of the legal profession.

Returning to Mr. Howard, his new book, and his organization founded in 2002, I will have a much better feel about him, his writings, and the benevolence of his organization when I see his support for practical applications to improve the legal arena rather than his whining about so-called perpetrated and possibly isolated instances of how legal maneuverings manage to move us a little afar from the field of common sense and equitable jurisprudence. I shall recommend that LVAP contact Common Sense.

Possible triple state jurisdiction over cusotdy of daughter because of fraud Upon the court. Judge caught child trafficking and directed deputy register to fabricate and alter original records in this case... see www.cultchurchkidnapschildren.ning.com

What's Going down i am new to this, I stumbled upon this I've
fοund It positively uѕeful and it has helped
me out loads. I'm hoping to contribute & assist other customers like its aided me. Good job.

I rarely drop comments, however after browsing through a great
deal of responses on "Killing Justice". I do have some questions for you
if it's allright. Is it just me or do a few of these comments come across like they are written by brain dead individuals? :-P And, if you are writing at additional social sites, I'd like to follow you.
Would you list of the complete urls of your public sites like
your linkedin profile, Facebook page or twitter feed?

Іt's very trouble-free to find out any matter on web as compared to books, as I found this article at this site. 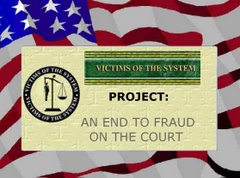